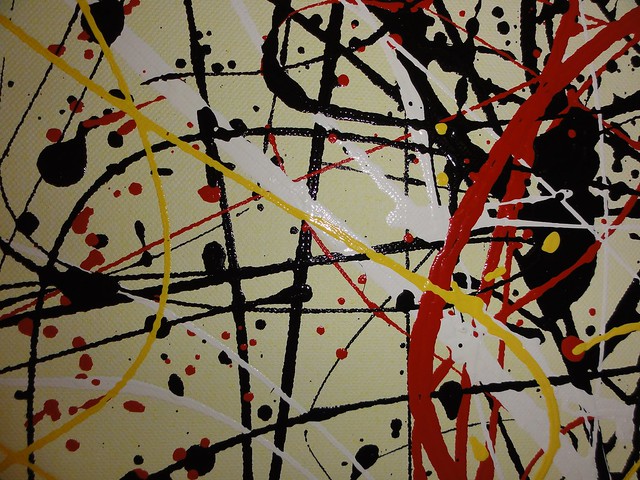 What did I make?

Why did I decide to do this?

John and I wanted to get rid of the built in cabinet in the dining room. This chunky block of asymmetric laminate wall units loomed across the back wall nearly two stories high. It made the whole room dark. I hated it.

One Friday night we met up with my friend Rachel for drinks. I talked about how we were going to pull out the dining room wall unit because I hated it.  Rachel said, “We should do a Jackson Bollocks, I did one with my friends years ago.”  She explained that a “Jackson Bollocks” was a painting in the style of Jackson Pollock’s mid-20th-century “drip and splash’ paintings.

It seemed like it would be fun to do some action painting whether or not we produced something that we could hang in the dining room.

Pollock was able to make huge paintings by rolling out unstretched canvas across his studio and painting while it lay on the floor.  There are photographs of him standing on the canvas, stretching out, flinging paint through the air.

I didn’t feel capable of stretching canvasses after we had painted them.  So we bought mounted canvasses from the art supply store.  The largest size was 60 by 40 inches.  There was only one.  There was also 1 canvas 60 by 20 inches,  We decided to buy both.  We planned to tape the canvases together making a 5 foot square.  Painting them together would mean that lines of paint would go across the two canvases.  Once the painting was finished and hung with a gap the eye would flow with the paint across the void.

The canvasses were so large that they wouldn’t fit in our car. I ended up standing in the car park balancing the canvasses (which were as tall as me) until I could persuade a taxi company to send me their largest minivan.

We did some small test canvases.  We set up a space on a garden table.  We used acrylic paint in tubes from the art supply store. We tried the paint with brushes and sticks but it was too thick to give loose splashes, drops and swirls.

We found that unless we waited for each addition of colour to dry the colours bled into each other creating indistinct dirty brown blotches. After looking at some documentary footage on the web we realised that we needed to use high gloss house paint and we needed to let it dry between layers. Blues and greens didn’t look right in our tests so we decided not to use them.  In the end we used black, red, white and yellow paint.

I drew a few tests using the Brushes App a layer for each colour to see how the layers could work.  It became clear that lots of layers looked better. 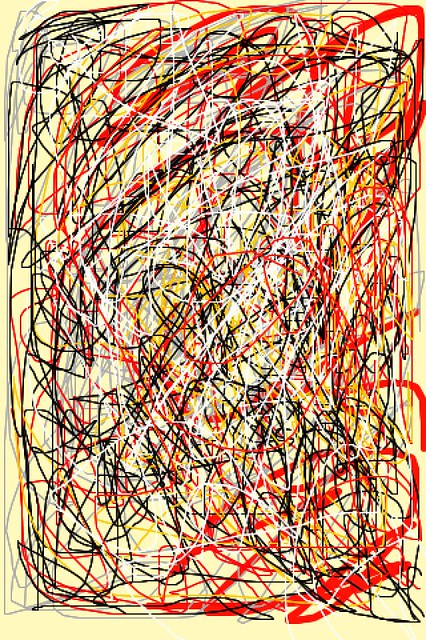 I had a two car garage and decided to paint there.  The garage was full of boxes and detritus from when John and I had moved in.  We had to get a skip and spend a weekend  emptying the garage before we had enough space. We decided to use drop cloths on the floor because we thought that a heavily paint spattered garage floor might not be a great future selling point.  The car didn’t fit in the garage once we put down drop cloths and laid out the canvasses.  John had to park on the street.

We planned to do the painting over a weekend.  We invited lots of people to come over and contribute.  We offered chicken wings and bubbles.  We said that we would have DVDs to watch while the layers of paint dried (this was back in 2010).

What did I buy?

We already had drop cloths and paint brushes.

Rachel, Kaine, Flo and Kim turned up to paint, drink wine, eat chicken wings and watch DVDs.  Rachel prepared the  canvas with a yellow wash made by diluting house paint with water.  The aim was to give a contrast that would cause the subsequent paint layers to pop.  The wash was stronger than we expected and the final painting is definitely yellow but it does make the white and red paint pop.

We took turns to apply paint.  The idea was that this would add to the randomness.  Each person could choose music and paint for the length of the song.  We used black first because it looked so strong on the blank canvas.

Early in the process a fly walked into a small drop of black paint and then kept going.  There were lots of fly puns after that – which ended with the painting being named Tempus Fugit. 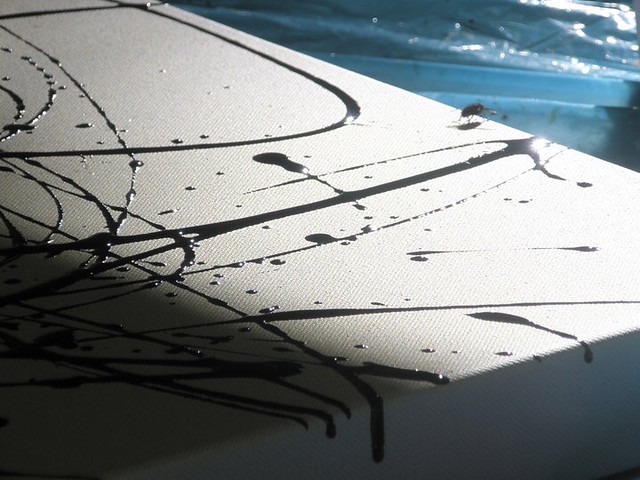 Despite all our efforts the painting didn’t end up being all that random.  The canvas was square and everyone tended to circle it when applying paint.   There are strong circles, spirals and curves following the square of the canvas.

One of the most satisfying ways of applying paint was to flick the paint which made great spatter and splotches.  It really felt like “action painting”. 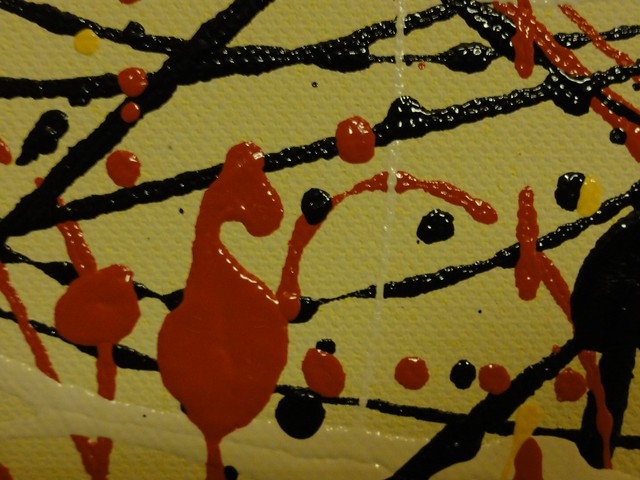 Flicking the paint was fun but it meant more drying time between layers.   Splotches are thick and take a long time to dry enough for the next layer.  Clean overlaps of paint looked great so we waited and waited.

By the end of the Saturday we had done 3 or four layers of paint, drunk several bottles of wine and watched “Inglorious Basterds” and “Transformers: Dark of the Moon”.

A couple of friends came back on Sunday and we did about as many layers again with less wine.  I can’t remember what movies we watched.

John and I kept adding layers over in the evening after work over the next few days.  In the end we stopped adding layers because the weather got worse and we were getting wet parking on the street.  The canvas was densely covered with lines, swirls and splashes of paint but you could see the yellow wash underneath. This sparse coverage caused by exhaustion means that our “Tempus Fugit” painting does not look like anything Jackson Pollock painted.  He had a lot more energy than we did and the paint bulges from his canvases.

Number One, 1950 by Jackson Pollock http://www.jackson-pollock.org/number-one.jsp#prettyPhoto[image1]/0/

We definitely didn’t have the determined spirit to create the dense textures that Pollock achieved.

Even though we had given up without achieving the thick layering of paint we had aspired to we couldn’t park in the garage the day after we stopped painting.  Some of the splotches were still pretty wet and would have run if the were stood up straight.  It took another week or so to dry sufficiently to move.  Six years later some of splotches still look wet.